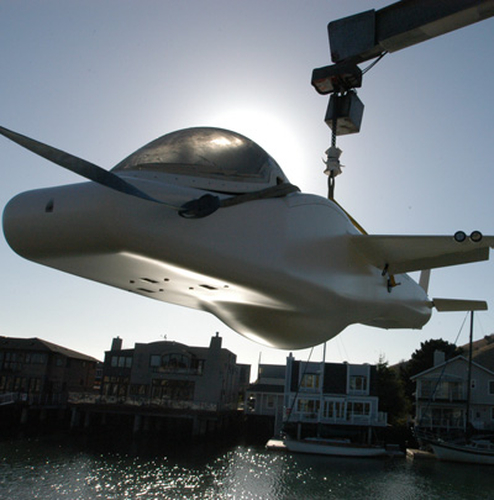 Unbeknownst to most of the world, the late super rich adventurer Steve Fossett had started work on an amazing flying submersible that would one day theoretically touch the stars. More importantly, however, was that the design would have allowed adventurers and scientists alike (and most importantly Fossett himself, of course) to venture into the deadly depths of the Mariana Trench, some 36,000 feet below the ocean's surface. Sadly, the design was put on hold immediately after Fossett went missing about one year ago, but that hasn't stopped San Anselmo inventor Graham Hawkes from detailing the project that Fossett tapped him to create two years before his death.

Called the Deep Flight Challenger, the submersible would have been "part spacecraft, part airplane and part submarine," Hawkes said. And somehow, thanks to the stuff street racers use to trick out their dashboards, the Challenger would have been capable of withstanding pressures of 20,000 pounds per square inch, (approximately 15,000 times the atmospheric pressure), he said. The "stuff" we're referring to is carbon fiber, and Hawkes said he opted for that material over conventional technologies, which use titanium. "The best and strongest materials such as titanium will only get you about halfway down to the ocean floor. We used carbon fiber that's laid down filament by filament under computer control, the same as what's used on rocket motor nozzles," he said. Fossett's remains were found amidst his plane's wreckage last week, confirming what many people had already suspected about the doomed billionaire adventurer. The fate of the submersible is unknown. Currently, the design belongs to Fossett's estate. [Marinij]