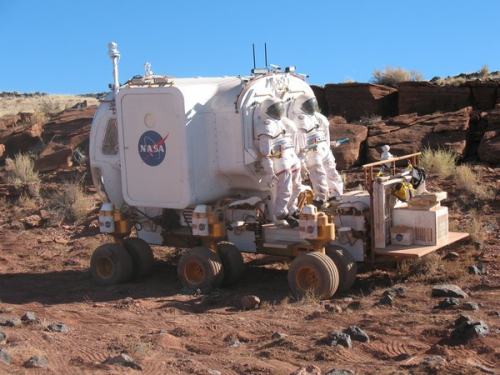 We've all seen black and white footage of astronauts on the moon hot doggin' it over craters and dunes in a trick electric buggy, but that was over thirty years ago. In 2020, when a new generation of astronauts head there, they'll need a new generation of whip too, and that's just what NASA recently demonstrated to the public. Called the Small Pressurized Rover Concept, it looks to be an evolution of the 12-wheeled Chariot prototype we saw earlier this year, pimped out with an air-tight cabin that sleeps two and some bitchin' gold dubs. Inside a pair of explorers can go lunar RVing for up to two weeks at a time, covering 625 miles on one charge at a leisurely 6 mph, hopping out through rear-mounted (non-next-gen) spacesuits when something interesting catches their eye. You know, like aliens or something. Could happen.
[Thanks, Peter D.]