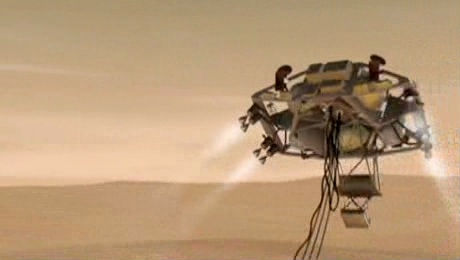 When I read that the UFO-looking Mars Science Laboratory's aeroshell would use a floating craneвЂ”called Sky Crane by NASAвЂ”to softly land the rover on Mars, I couldn't believe it. Now, watching this hyperrealistic NASA simulation showing how the mechanism actually floats, lowers the rover, and then flies away, I still can't believe it. This is the kind of stuff that makes the kid in me wake up and pay attention with my eyes and mouth wide open. The rockets of the aeroshellвЂ”a protective armor that will protect the MSL and guide it through its descentвЂ”will fire to steer the capsule towards the desired angle. When this is achieved, a long parachute will open to slow down the Mars Science Laboratory as it enters zooms down the Martian atmosphere. As soon as the capsule slows down, the heat shield will eject leaving the rover exposed inside the aeroshell, attached to the floating crane mechanism. That's when the whole landing process gets weird: The floating crane's rockets will fire up to further slow the descent. The top part of the aeroshell will then detach completely, leaving the sky crane alone holding the MSL rover, slowly descending towards the planet's surface. A few hundred meters above the terrain, the floating sky crane will start lowering the rover down using "a trio of bridles and one umbilical cord" until it touches down. At that time, the sky crane will detach from the rover and fly away, probably to fall over the home of some poor old Martian grandma. I don't know about you, but the whole operation mesmerizes me to no end.