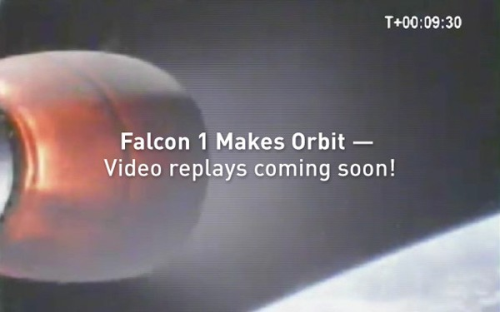 It's been a long road plagued with disappointments and major mishaps, but SpaceX (and founder Elon Musk) has finally made history -- on Sunday the company's Falcon 1 rocket reached orbit. After three attempts to bring the dream to life, the space exploration company succeeded in putting the first privately-developed rocket into space. The liftoff was seen live during a webcast, and the company's site was continuously updated with news, including a message written at 16:26PDT reading:

T+0:08:21 Falcon 1 reached orbital velocity, 5200 m/s
Nominal Second stage cut off (SECO) - Falcon 1 has made history as the first privately developed liquid fueled launch vehicle to achieve earth orbit!!!!!!
Needless to say, after the trials and tribulations SpaceX has gone through (including the loss of Star Trek star James Doohan's ashes), this must be welcome relief... as well as the birth of a potentially lucrative new enterprise. Er, no pun intended.