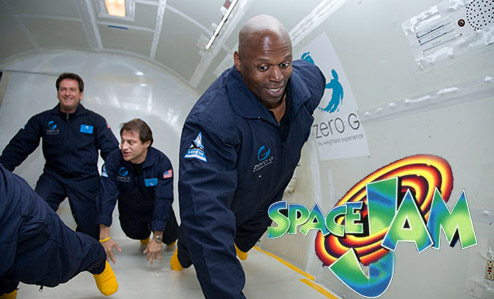 Stand aside Michael Jordan, because ex-Washington Redskins linebacker Ken Harvey has been pitching NASA scientists and venture capitalists alike on a high concept sport: Float Ball. Planned for venues including space shuttles, the Moon and even Mars, needless to say, it's a crazy idea. Actually, scratch that. It's only a half-crazy idea. Float Ball is a combination of football and basketball in a zero gravity environment. Players bounce their way through the court, ricocheting off the floor, ceiling, obstacles and other players. The goal is to throw the ball through the hoop. The bigger goal is to throw your player with the ball through the hoop—a maneuver we're coining right this second as the space jam. Despite Harvey's popularity space entertainment circles, he has no plans on how to fund the space sport. But he doesn't expect the vision to actualize over night. Astronaut fitness programs coupled with VR simulators would naturally progress into high stakes competitive sportutainment. And while he may be right, Harvey forgets about one thing: Geeks hate jocks. So go build your own spaceship, a'hole. [NYT]
[ Via: Gizmodo, The Gadget Blog ]