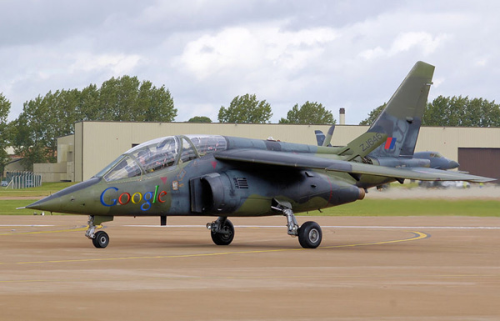 The Mountain View Voice has sleuthed something interesting in Google Land (which the Times's Bits blog also picked up on)вЂ”H211 LLC, the company controlled by the G's execs that operates Larry, Sergey and the rest of the Googlers' private jets, has recently acquired a fighter jet. A Dassault/Dornier Alpha Jet, to be exactвЂ”a light attack and trainer jet used by air forces around the world. So, aside from performing high-speed low-altitude fly-bys of Jerry Yang's crib, what else does Google have planned for a military aircraft? Science, of course! H211 LLC uses many of its jets for NASA-sponsored experiments, since they operate primarily out of Moffett field, a NASA-controlled airstrip that's conveniently located right next to Google's Mountain View HQ. The jet was acquired to carry scientific instruments that could not be rigged up to Boeing 757/767 and Gulfstream jets the company already operates, some of which were used to monitor the re-entry of the ESA's Jules Verne satellite. So other tech companies probably don't need to worry about an escalating proliferation of military hardware in preparation for a Silicon Vallery air superiority battle just yet. DГ©tente! [">Mountain View Voice, NYTimes]