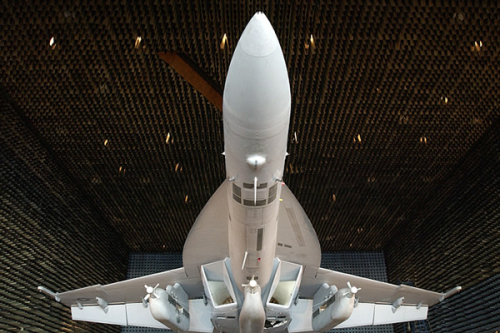 When I first came across this photo I thought it was a new classified starfighter being tested by the Navy and Boeing Phantom Works in a secret underground anechoic chamber in the Moon. Then I realized it had the shape of something closer to Earth: It looked like an F-18 but it is not. It's an EA-18G Growler, a variant of the F/A-18F Super Hornet Block II that is not designed to kill kill faster faster, but for airborne electronic attacks. Now finishing its testing phase as it gets ready to enter action next action, the EA-18G will replace the current and aging EA-6B Prowler. With its two F414-GE-400 engines, totalling 44,000-pound of trust, it's a much more powerful beast than the 4-seater Prowler. The EA-18G's mission is to jam the enemy networks from the air, using a variety of systems installed on a pallet in the gun bay and in two wingtip pods. The remaining nine weapons stations are available for other pods containing the electronics necessary for standoff jamming, escort jamming, time critical strike, and communications countermeasures. In the cockpit, it has an active electronically scanned array radar, which is capable of pinpointing the targets that need to be jammed (or destroyed using specialized radio-bound missiles) with greater accuracy than ever before. In other words, to give mess with the Wi-Fi network of all those terrorist living in their desert caves.