NASA Returns to the Moon as Indian Spacecraft Stowaway [Space] 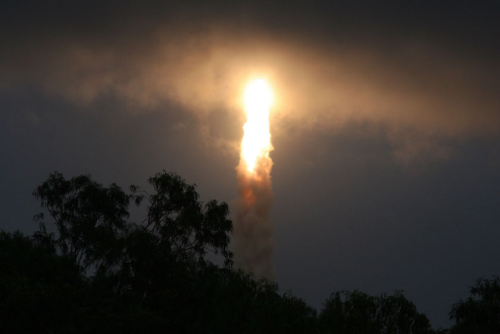 The Chandrayaan-1, literally "Lunar Craft", launched today from the Satish Dhawan Space Centre in Sriharikota, on the southeastern coast of India. The spacecraft will orbit the Moon for two years, charting its mineral composition, searching for ice, and helium-3, all three fundamental for the establishment of a lunar outpost. Or a call center. It can go either way. Chandrayaan-1 is India's first mission to our satellite, and it's also NASA's return to the moon after the Apollo missions:

Two NASA instruments to map the lunar surface will launch on India's maiden moon voyage. The Moon Mineralogy Mapper will assess mineral resources, and the Miniature Synthetic Aperture Radar, or Mini-SAR, will map the polar regions and look for ice deposits.

Apart from these two NASA instruments and three European Space Agency instruments, the Chandrayaan-1 is carrying the C1XS, an X-ray Spectrometer to get high-quality, X-ray spectroscopic mapping of the Moon, a near infrared spectrometer called SIR-2 to study the chemical composition of the Moons crust and mantle, and SARA, the Sub-keV Atom Reflecting Analyser which will study plasma-surface interactions in space for the first time. [ISRO and NASA]