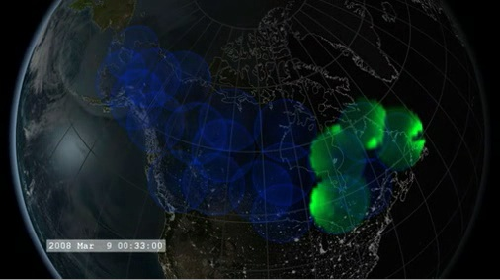 Five NASA satellites from the THEMIS mission were recently able to closely witness the chain of events that occurs to create the northern lights for the first time. Complex stuff going on here, but it involves the Earth's massive electromagnetic fields being stretched to their limits by magnetic bombardment from the sun, and then snapping back into place like giant rubber bands, all of which the five THEMIS birds were able to witness at precisely the right moment. Awesome. "Explosions of magnetic energy a third of the way to the moon," says NASA, "power substorms that cause sudden brightenings and rapid movements of the aurora borealis...We discovered what makes the Northern Lights dance." The process is called magnetic reconnection (check back to that incredible video of visible magnetic field lines for a general idea) and when we're talking about the fields generated by the whole Earth, it involves a lot of energy. When the fields snap around like rubber bands, charged particles collide with atmospheric gasses and release visible light energy, and boom, aurora borealis: 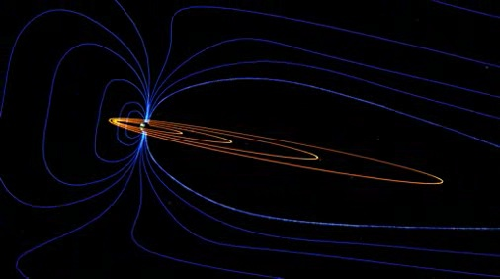 The THEMIS crafts' mission is to study these explosions of magnetic energy, called substorms, and learn how they affect the Earth. PS: It's solar wind day here on Giz. The release:

NASA Satellites Discover What Powers Northern Lights GREENBELT, Md. — Researchers using a fleet of five NASA satellites have discovered that explosions of magnetic energy a third of the way to the moon power substorms that cause sudden brightenings and rapid movements of the aurora borealis, called the Northern Lights.
The culprit turns out to be magnetic reconnection, a common process that occurs throughout the universe when stressed magnetic field lines suddenly snap to a new shape, like a rubber band that's been stretched too far. "We discovered what makes the Northern Lights dance," said Dr. Vassilis Angelopoulos of the University of California, Los Angeles. Angelopoulos is the principal investigator for the Time History of Events and Macroscale Interactions during Substorms mission, or THEMIS. Substorms produce dynamic changes in the auroral displays seen near Earth's northern and southern magnetic poles, causing a burst of light and movement in the Northern and Southern Lights. Substorms often accompany intense space storms that can disrupt radio communications and global positioning system signals and cause power outages. Solving the mystery of where, when, and how substorms occur will allow scientists to construct more realistic substorm models and better predict a magnetic storm's intensity and effects. "As they capture and store energy from the solar wind, the Earth's magnetic field lines stretch far out into space. Magnetic reconnection releases the energy stored within these stretched magnetic field lines, flinging charged particles back toward the Earth's atmosphere," said David Sibeck, THEMIS project scientist at NASA's Goddard Space Flight Center in Greenbelt, Md. "They create halos of shimmering aurora circling the northern and southern poles." Scientists directly observe the beginning of substorms using five THEMIS satellites and a network of 20 ground observatories located throughout Canada and Alaska. Launched in February 2007, the five identical satellites line up once every four days along the equator and take observations synchronized with the ground observatories. Each ground station uses a magnetometer and a camera pointed upward to determine where and when an auroral substorm will begin. Instruments measure the auroral light from particles flowing along Earth's magnetic field and the electrical currents these particles generate. During each alignment, the satellites capture data that allow scientists to precisely pinpoint where, when, and how substorms measured on the ground develop in space. On Feb. 26, 2008, during one such THEMIS lineup, the satellites observed an isolated substorm begin in space, while the ground-based observatories recorded the intense auroral brightening and space currents over North America. These observations confirm for the first time that magnetic reconnection triggers the onset of substorms. The discovery supports the reconnection model of substorms, which asserts a substorm starting to occur follows a particular pattern. This pattern consists of a period of reconnection, followed by rapid auroral brightening and rapid expansion of the aurora toward the poles. This culminates in a redistribution of the electrical currents flowing in space around Earth. THEMIS is the fifth medium-class mission under NASA's Explorer Program. The program, managed by the Explorers Program Office at Goddard provides frequent flight opportunities for world-class space investigations in heliophysics and astrophysics. The University of California, Berkeley's Space Sciences Laboratory in Berkeley, Calif., managed the project development and is currently operating the THEMIS mission. ATK Space (formerly Swales Aerospace) of Beltsville, Md., built the THEMIS satellites. The THEMIS team's findings will appear online July 24 in Science Express and Aug. 14 in the journal science. For more information about the THEMIS mission, visit: http://www.nasa.gov/themis