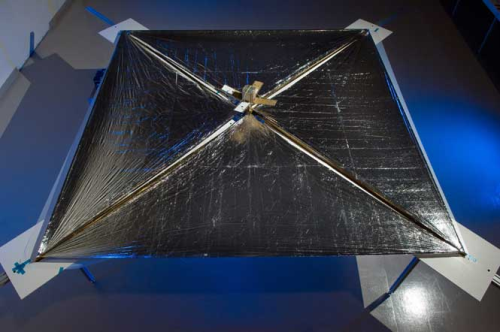 NASA's getting set to launch the NanoSail-D next week, its first solar-sail powered spacecraft which catches photons like wind on a 10 square-meter sail made of a thin metallic polymer. The craft uses a crazy Rube Goldberg-like method to deploy the sail that involves burning fishing line at critical moments to release the spring-loaded sail, which is getting shown off in the video here.
It is hoped that sails many times larger (we're talking football fields) will eventually propel long-range missions into deep space, with the help of lasers here on Earth firing light into their sails. The NanoSail-D is sticking in near-Earth orbit to perform its tests, which will inform later uses of the tech. One caveat is that the launch is scheduled for July 29 aboard a SpaceX Falcon 1 rocket, which like to go ka-boom and have yet to deliver a payload into orbit successfully. Our fingers are crossed for the little sailor. [Technology Review]