Does This Finger Sized Tube Carry The Secrets of the Big Bang? [Big Bang Theory] 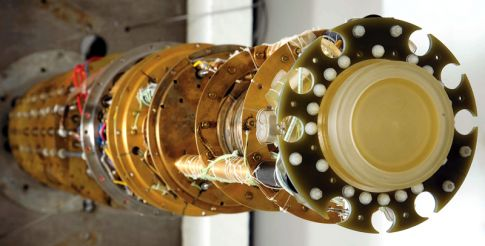 PopSci has a great article about scientists who are trying to recreate the events of the Universe, such as the big bang and black holes, with controlled lab experiments. The Universe in a Teacup, shown above, cools Helium to 0.0003В°F above absolute zero, and moves around the particles so that little whirlpools remain after the Helium settles. The state inside this pinky-sized tube is thought to be the condition of the universe just after the big bang.Scientists also believe that when two large, planar bodies, referred to as branes, collide in the universe, they release enough energy to create a rapid expansion that can spawn a new universe (see explanatory gallery here).
While they can recreate scenarios they believe to be the same as these events, the lack of monitoring tech available makes it impossible to verify. The list of mysteries and theories that scientists have attacked over the last few years makes this an interesting read for fans of Hawking-esque space thinking. [PopSci]