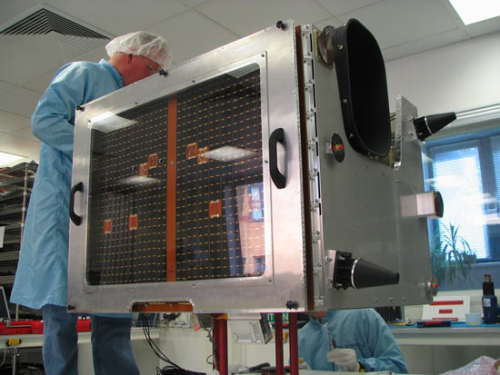 The Guardian wrote a neat feature on Surrey Satellite Technologies, who are currently working on scaled down, fully functional satellites for commercial consumption that only cost 10 million dollars, only weigh 220 pounds, and only take 18 months to build. But when compared to full-sized satellites ($500m, 1000 kg) used by government agencies and large corporations, these micro-satellites are amazingly compact and cost effective. Surrey will be sending 5 of these into orbit on the back of an old soviet rocket in Kazhakstan. The "diminutive" satellite will be able to take photos for various applications, like surveying natural disasters, evaluating agricultural fraud, so on and so forth. However, the paranoid schizophrenic in me thinks it's really going to be used for personal world domination. [The Guardian via John Dvorak via Gizmo Watch via Dvice]