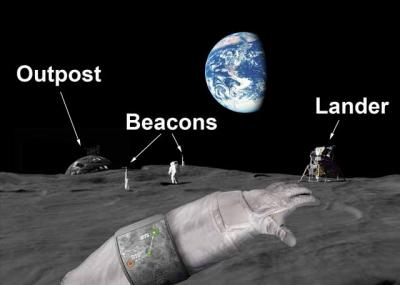 When astronauts finally get back to the moon sometime between now and 2020, they will have an advantage that their predecessors did notвЂ”GPS. Well, it's not technically GPS given the fact that there are no satellites orbiting the moon, but the astronauts may not know the difference. The new system being developed by Ohio State researcher Ron Li will "rely on signals from a set of sensors including lunar beacons, stereo cameras, and orbital imaging sensors" to simulate GPS.

Li explained how the system will work: images taken from orbit will combine with images from the surface to create maps of lunar terrain; motion sensors on lunar vehicles and on the astronauts themselves will allow computers to calculate their locations; signals from lunar beacons, the lunar lander, and base stations will give astronauts a picture of their surroundings similar to what drivers see when using a GPS device on Earth. The researchers have named the entire system the Lunar Astronaut Spatial Orientation and Information System (LASOIS)

NASA has awarded Li a $1.2 million grant to develop the LASOIS system over the next three years. He hopes that it will help the astronauts explore the lunar surface with a greater degree of confidence and avoid the stress that comes with getting lost. After all, losing your bearings on the moon is a far cry from taking the wrong exit on the highway. [Physorg]