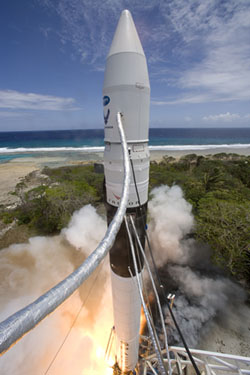 Like watching rocket launches? Then check out the live webcast of SpaceX's Falcon 1 launch from the Marshall Islands at 7pm EST. The Falcon 1 measures 90 feet, weighs roughly 103,000 pounds and uses a two stage, liquid oxygen and rocket grade kerosene vehicle to blast off. SpaceX, started up by Elon Musk of PayPal fame, is one of several new commercial companies trying to commercialize space travel, wrestling the mostly government-funded industry into the privatized world. Depending on how the launch goes, Falcon 1 will either prove itself to be a reliable way to transport satellites out to low Earth orbit or the project that turned Musk from billionaire to broke (read: millionaire). Update: looks like the launch keeps on being delayed, so check in and see if you've missed it yet. [SpaceX]