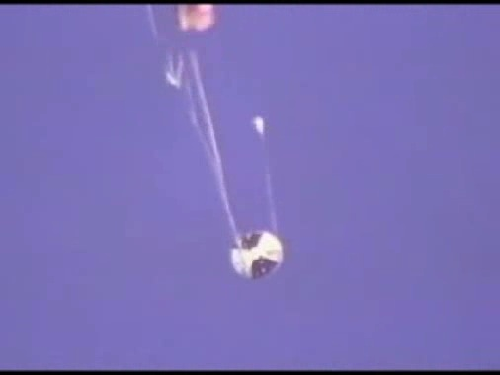 Filed under the "good thing we tried it out first" department is this recent test of Shuttle-replacement Orion's parachute re-entry system. Based on the same system used for Apollo, the group of eight parachutes deploys after re-entry, ensuring the Orion capsule glides down back to terra firma for a pillow-soft landing. That's what's supposed to happen, anyway. Here, the initial chutes that position the craft for the main chutes' test (so, not a part of the final system) failed shortly after being dropped from a C-17 cargo plane at 25,000 feet. As you can see, it all goes downhill from there, terminating in "a landing that severely damaged the test mock-up." Well said, NASAвЂ”I'm guessing any test dummies inside for pressure measurements had to be scraped off the desert floor with a knife.
[ Via: Gizmodo, The Gadget Blog ]
[ Tag: ]