NASA might bring plasma rocket to ISS for testing 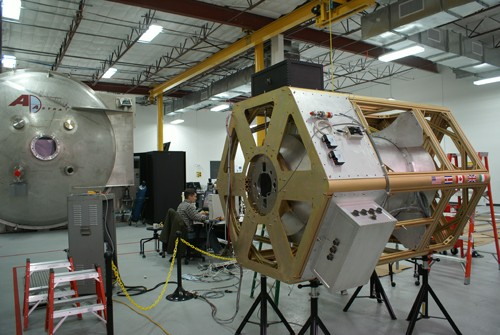 Ad Astra's VASIMR plasma rocket is about ready for testing, only problem is it requires the vacuum of space to do it in. NASA is now considering taking the rocket up to the International Space Station, clipping it on and firing her up -- perhaps even using it to reposition the station. Formerly of NASA, Franklin Chang Diaz left to form Ad Astra and perfect his plasma rocket, which he hopes will be able to take space vehicles from low-earth orbit to the moon. The rocket draws its own power from solar cells, and then uses radio waves to heat argon into plasma, and directs that plasma using magnets. Pretty fancy stuff, and since the rocket is reusable and can propel payloads double the size of equivalent chemical engines, there could be cost savings in the long run. Right now it seems the main hang ups for NASA are where to attach the rocket to the ISS where it won't be interfered with, and how to get it into space after the space shuttle is retired in 2010