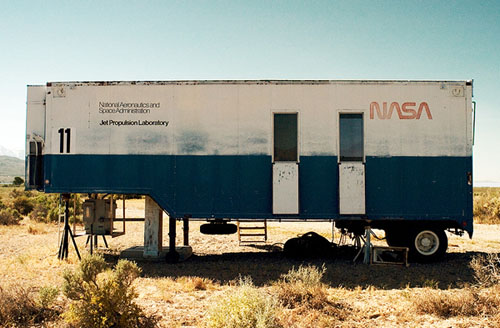 Since it came about in the 1930s as the Army's rocket research lab, the Jet Propulsion Laboratory has been a part of just about every major unmanned U.S. space mission to date. JPL also has a somewhat surprising history of running major missions out of modular trailers scattered around their Pasadena HQ, which are packed with all of the stuff you need to, oh, I don't know, monitor a spacecraft on its way to Mars. Photographer Richard Harrington stumbled upon one of these trailers, abandoned on a dusty lot somewhere between L.A. and Las Vegas, and as you would expect, it's a retro space-tech dream inside. The image associated with this post is best viewed using a browser.It's a little puzzling as to how something like this could find its way to a derelict desert in the middle of nowhere, but with NASA's budgetary fluctuations, I guess sometimes you have to rip and run. The whole thing has a definite abandoned-seconds-before-the-apocalypse kind of vibe. If anyone has any idea what kind of machines we're seeing here, fill me in. More pics: [Richard Harrington via FFFFOUND]