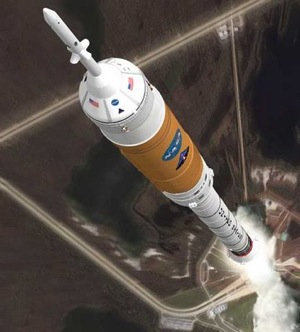 NASA's Ares 1 rocket may be facing another large technological hurdle before it can take part in the future lunar missions: it's apparently in danger of banging into its own launch tower if the wind is up. Actually, the wind needs only be a gentle-sounding 12.7mph from the south-east to cause problems, and it's all to do with how the rocket's solid fuel motor causes it to "hop" on ignition, before it powers upwards. Computer models are reportedly showing that during this crucial moment, the wind could cause enough "liftoff drift" that the rocket could get dangerously close to the tower. And if it managed to avoid an impact, there's still the danger of the flaming rocket gas output badly damaging the tower's structures. NASA itself seems confident it can overcome this problem (if it ultimately proves to be a significant enough one) by positioning the tower differently or redesigning the launchpad: both requiring time and money that could impact the bigger program. After the earlier reports of "tuning-fork" problems with the manned missile, the calls for an alternative solution to the whole Constellation program begin to look interesting again: what's your opinion chaps? My take on this: this sort of hurdle comes up frequently when you're in a program of this scale and complexity—some sort of better workaround will surface eventually.