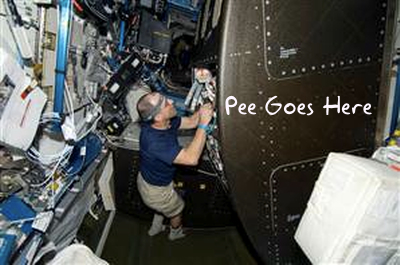 The multimillion dollar water recycler recently installed by astronauts aboard the International Space Station is still experiencing some minor issues this evening, meaning crew members will just have to wait to have their first peetinis, Long Island Iced Pees, Whiskpee Sours and other lame pee-themed drinks I have yet to think of. The prototype recycler, which separates waste from water using a centrifuge system, was brought to the station aboard the latest shuttle mission. It malfunctioned two hours after installation, although a separate sweat and waste water recycler is working as expected. Phew! An early fix was attempted today by shuttle captain Michael Fincke and fellow astronaut Don Pettit (*no $100,000 tool bags were harmed in the making of this repair). The two astronauts reported hearing a "new sound" from the machine after the repair, and three hours later it shut down again. It was able to process "about a gallon of urine" in that time period. Under optimal conditions, the recycler is supposed to run four hours a pop. Now, we joke about drinking urine, but this is actually a pretty serious issue—especially if the ISS crew is going to double from three to six in 2009 as planned. Theoretical missions to Mars will also rely on the prototype, because water is heavy, and lugging it between planets is prohibitively expensive. And, making matters worse is the fact that this urine-cleansing uber-gadget is one-of-a-kind. There is no cosmic Home Depot that NASA can go to for a replacement. "We haven't started talking about when we'd stop troubleshooting on orbit and decide to bring the unit home," Courtenay McMillan said. "That's a pretty big decision to make." Indeed. And so is taking that first sip of urine water. Cheers!
[ Via: Gizmodo, The Gadget Blog ]