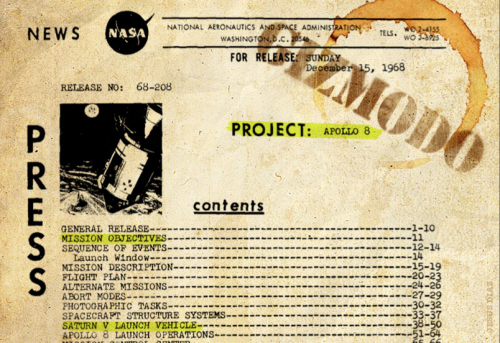 Used to a thousand inane press kits announcing useless pieces of junk, I wish it was 1968. Then, I could have received this Apollo 8 Press Kit, detailing the first manned mission to the Moon. Forty years ago the crew of the Apollo 8 was—right now—on their trip back to Earth after the successful mission that took them to the Moon. In the Command Module, Mission Commander Frank Borman, Command Module Pilot James Lovell—who later became Mission Commander for the ill-fated Apollo 13—, and Lunar Module Pilot William Anders were probably talking about what they just did in their four-day trip. Or maybe they were just sitting there, checking buttons and counters, in silence, reflecting on their journey, the most amazing ever in the history of mankind. 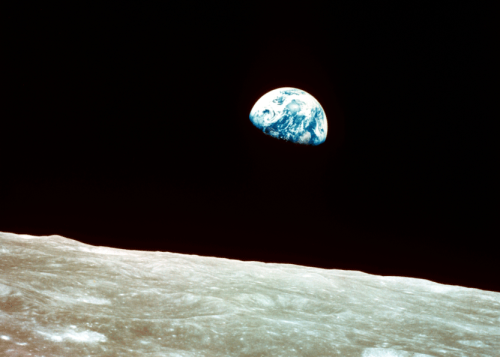 Like all great trips, theirs came completely out of the blue. Originally, they weren't going to the Moon at all. Apollo 8 was going to be a low-earth orbit to test the Lunar Module and Command Module but, since the Lunar Module wasn't ready, NASA decided to change the mission objectives and send the crew to the Moon. As a result, they had to retrain in record time for a completely new mission. They did, they were cool, and they kicked ass, becoming the first three humans to see the dark side of the Moon a whole five years before Pink Floyd had their other trip to the Dark Side of the Moon. Their unexpected voyage was the first ever to escape Earth's gravitational force and visit another celestial body. And if you kids think that's not cool, I don't know what is. Fortunately, nothing went wrong and their risky odyssey saved 1968 along with Johnny Cash's live concert at Folsom Prison—a terrible year in which the Vietnam War exploded, the Soviet Union invaded Prague, Robert F. Kennedy was assassinated, and Richard Nixon was elected the thirty-seventh President of the United States. Here's the original press release and the illustrations from the 101-page press kit announcing the crazy mission: Back on Earth, Neil Amstrong, Buzz Aldrin, and Fred Haise Jr.—their backup crew—were probably waiting, maybe talking with them from ground control. And that, my friends, that's a complete different story for next year.